Following IASA guidelines, more than 500 compact cassettes of all brands and types have been recently catalogued and digitized (04/2013 – 07/2014). Although most carriers were in good optical and mechanical condition and allowed for proper transfer, around 2% of them presented severe degrees of tape-to-head sticking and squealing (“stick-slip[2]”) which resulted in a well-known array of problems:

the frequency modulation (FM[3]) of the original audio carrier which causes, depending on its extent, from a wobbly flutter effect to complex non-linear frequency sidebands (high frequency artefacts) that cannot be removed once in the digital domain[4] a progressive decrease in the original signal level, specially at high frequencies (low-pass filtering) increased tape-to-head tension and friction that slows down and eventually stops the deck playback transport.

Such problems are as a whole the result of the so-called Soft Binder Syndrome (SBS)[5] to substitute what was formerly known as Loss of Lubricant (LoL).

The goal of this article is twofold:

This re-lubrication proposal is based on a standard tape transport speed-controlled with an Arduino[7] motor shield processor which is able to provide continuousand even lubrication to tape as it travels in an external path around a rotating foam drum flooded with cyclomethicone, a volatile siloxane that completely evaporates with time. Playback equipment for the re-lubricated tapes (Nakamichi CR-7 and ZX-7) remained undamaged in the mid/long term.

2. SBS, SSS, LoL: the problem and the terminology in context

“Soft Bynder Syndrome” is broadly accepted as a catch-all phrase to describe several problems related to hydrolyzed polyester urethane binders (including lubricants) and consequently to different and faulty tape behaviours.

It has been shown that, in normal conditions of use and storage, magnetic tape is not prone to lose its original amount of lubricant, even though exhibiting SSS or SBS. Following Hess terminology, the FACET document proposes SBS-UP (Soft Bynder Syndrome – Unidentified Problems”) as a way to particularly refer to this formerly misunderstood “Loss of Lubricant”.

Analogue cassette tape (from 1963 on) may exhibit this SBS-UP (and not SSS) due to the following facts:

Once discarded incubation as a temporal solution, and also dismissed the actual loss of the lubricant as the main reason for SBS-UP, which approaches are left?

Instead of acting on the tape, Hess and others propose to adapt the environment for a controlled cold playback, were low temperature -below the so-called glass transition temperature Tg- would reduce stick-slip noise modulation. In favour of this approach there is the experienced fact that SBS increases with working temperature, that is, after the reproducing machine has achieved its normal working temperature (which may be especially high in cassette decks). The author has not yet tried or found any case-studies of this approach specifically applied to cassette tapes and players, but it has been tested by Hess on open-reel tapes[9].

Discounting actual loss of the original lubricant, its degradation or failure to work as intended might be one of the reasons for a failure playback. Based on re-lubrication, temporal solutions have been devised to reduce friction by temporally smoothing tape-to–head wear while minimizing spacing losses (HF response decay).

Re-lubrication should then be considered not as a way to compensate for a material loss, but to recover the ability of transporting the tape smoothly through its path.

Several lubricants have been reported as possible candidates[10], among which the author considered two

Cyclomethicone has been preferred for the following reasons 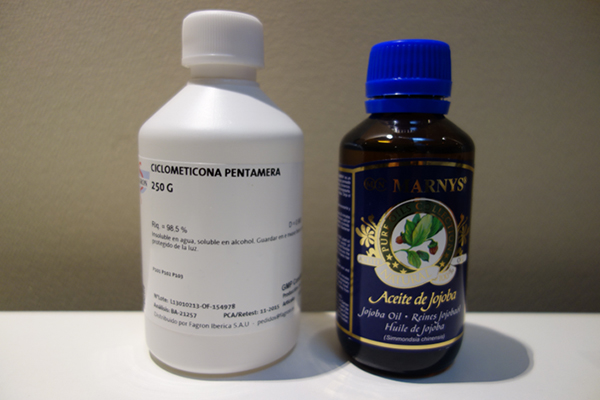 This final point must be overstated, as any additional lubricant won’t be absorbed by the binder and thus should be removed, spontaneous vaporization being the ideal solution.

As the total amount of cassettes affected by SBS in the Alicia de Larrocha Archive wasn’t critical, a simple, one-at-a-time method for cassette tape re-lubrication was devised to allow for a motorized, smooth, uniform application of the lubricant over the whole tape width and length outside the cassette deck, avoiding the need of electromechanical modifications.

A propotoype was built based on the following elements

The actual implementation could not be simpler: the Arduino microcontroller is programmed through a computer laptop to control the rotating time, speed and eventually direction of the standard transport motor (real-time forward playback speed used). The foam drum is heavily flooded with the synthetic lubricant and remains fully wet throughout the length of any tape; being lightly-weighted, it sticks to tape and rotates along by static friction on its axis, avoiding the need for a synchronic motor. 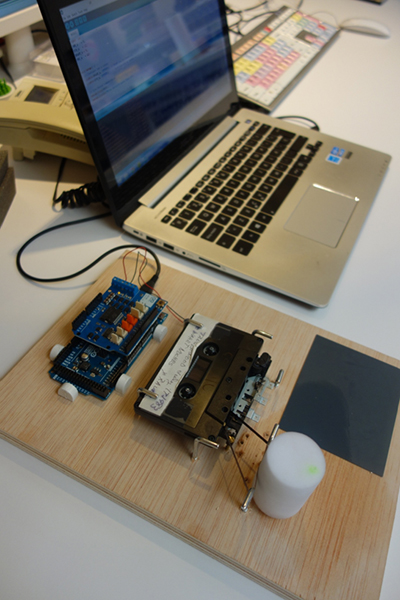 The prototype, mounted on a soft plywood board, allows for adjustable pins or hooks to specifically house any cassette and provide the easiest and smoothest path around the foam drum. When needed, a specific pin is oriented towards the pinch roller to add a slight pressure in order to maintain tape-to-roller contact for steady tape transport. Actual behaviour can be seen on the following video:

(in case your browser does not support embedded viewing, please click on Video re-lubrication prototype)

Such a solution avoids the need to extract the tape from its cassette shell to apply re-lubrication, so welded shell tapes (with no screws) are not damaged.

tension and friction at the tape head

Table1. List of tapes from the ALicia de Larrocha Archive affected by SBS

Re-lubricated tapes were played back and digitized within the next 24 hours to ensure action before lubricant evaporation. Results were satisfactory in all cases, even though a second pass was needed for the cassette tape corresponding to Case 1.

Two study-case examples, Case 1 and Case2, can be heard here:

No post-production processes were applied whatsoever.

As sonic and graphical evidence, we will analyze a 75 seconds sample of the Chopin Piano Concerto nº2, played by Alicia de Larrocha with Orquestra Ciutat de Barcelona (former OBC) conducted by Antoni Ros-Marbà on April 17, 1971 (live recording). The sample was recorded in tape nº7 (see Table 1).

The following figures show the sonogram and the superimposed waveform of this musical passage, pre and post re-lubricated. Vertical axis shows frequency in a logarithmic scale. Beyond the extended high frequency noise along the timeline, highlighted high frequency modulated sidebands are specially revealing. Such inter-modulated ascendant and descendant artefacts are the side effect of a musical phrase where the solo piano plays ascendant and descendant scales. Such artefacts largely disappeared from Figure 2. 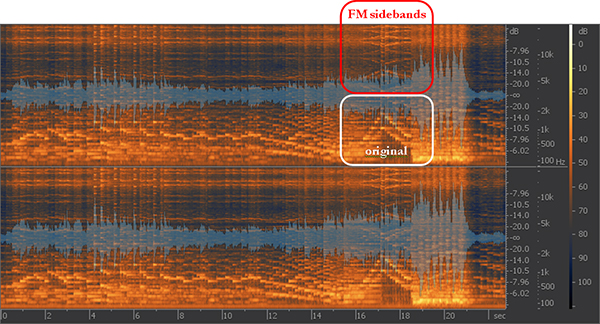 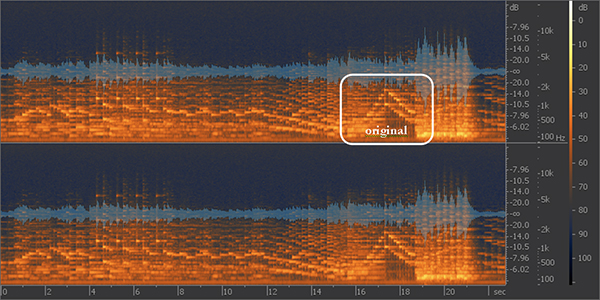 Figures below allow for a closer look at a linear-scale sonogram[15] of the same musical fragment. Figure 3 reveals several side band replicas of the original content (centred at fc) at frequencies fsb = fc±nfm (where n=1,2,3…) and spaced at multiples of fm.

Based on analysis of the sonogram data, the original baseband –the spectrum of the original audio carrier – is frequency modulated by the stick-slip distortion at an approximate modulation frequency of fm = 4920Hz (a period Tm = 0,203ms).

A mild stick-slip distortion would result in a scrape flutter (musically speaking, a wobbly vibrato, as can be heard in Case 2), whereas severe distortion (high amplitude stick-slip as in Case 1) will generate a very complex spectral pattern. 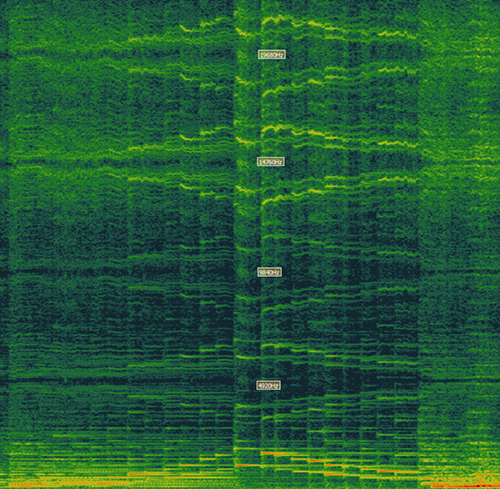 Figure 3. Case1 pre-lubrication. Baseband and FM modulation at multiples of around 4920Hz 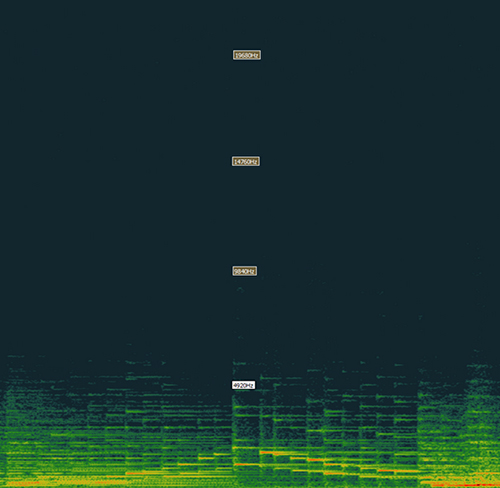 6.1.1. The evolution of FM distortion during playback time

It can be also interesting to analyze the evolution of the modulation frequency thorough the length of this particular tape number nº7 (45min per side – see Table1). This will be related to the ability of the original lubricant to provide smooth tape transport as much as to related mechanical factors such as the tape-to-head friction, the tape tension, the sturdiness and stability of the tape transport, the working temperature of the cassette deck, etc.

The next figure traces the evolution of FM distortion, very low at the beginning, varying during a certain amount of time (see the initially wavy pattern for fm) but finally severe and roughly constant. In any case the distortion cannot be supposed constant throughout the tape, as for instance modulation distortion is quite low and inaudible between minutes 0:00 and 02:30 as well as between 13:00 and 14:00, but almost constant and steady from around minute 23:00 on. As expected, passages with no recorded sound imply no FM distortion. 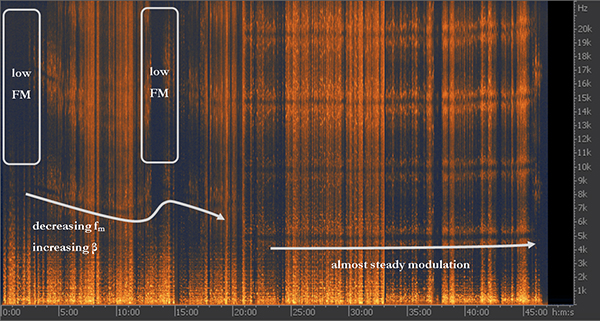 We can deduce from these equations that, the lower the modulator frequency fm,

Even though not readily visible in the sonogram, the extent of the carrier’s frequency modulation ∆fc (that is, the stick-slip amplitude) is the main consequence of this increased tape-to-head friction and thus the increased modulation index β.

Even though overall improvement in sound quality was consistent after re-lubrication, some drawbacks were detected:

In order to verify lubricant vaporization, an informal playback test was conducted four months after re-lubrication. As expected, all tapes exhibited varying degrees of the original SBS problem, a fact that confirms re-lubrication only as a temporal solution for proper digitization.

Discarded backing for cassette tapes with SBS, as also any digital means of sound restoration at a post-production stage due the complexity of the distortion pattern, re-lubrication has shown promise as a way to deliver -albeit temporally- playable cassette tapes to digitise.

When planning and implementing a prototype to allow for re-lubrication, care has been taken to ensure the following aspects:

I’d like to thank Elena Elía and Maria Ferré, curators from the Alicia de Larrocha Archive, as well as Alicia Torra de Larrocha, for their kind support and permission to investigate and show practical examples of tapes with SBS. I’m also indebted to Paul Poletti, Perfecto Herrera and Enric Guaus, professors from the ESMUC Sonology Deparment, for reviewing the drafts of this document. I’d finally like to thank Margarida Ullate, Marcos Sueiro and Ferran Conangla for their encouragement to write this document.